You'll be the first to know when apps open.

Thanks for submitting your application!

Thanks for submitting your application!

The final step is to book a short interview with your career advisor.

A few questions from us.

There's no formal preparation needed here. All you should think about is why you want to do this program, and how it could benefit you and your goals.

We know iX is a big decision. There will be ample time for you to ask questions at the end of your interview so we can ensure you have all the info you need.

We'll call you on your phone, or schedule a Zoom call. The call will last around 10-20 minutes, but there's no strict time limit if you have questions.

Written applications and GPA only show so much of the picture. iX stands for authentic human connection, and the interview allows us to get to know you.

Our goal is to ensure that this is the best decision for you, and that you will thrive in our cohort this year. We look forward to getting to know you.

Michael will be your iX Career Advisor, interviewer and future point of contact for any and all questions you have about the program. 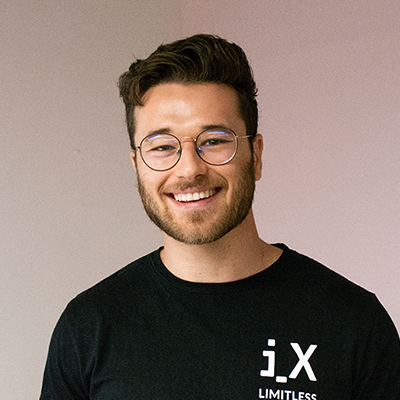 Michael’s journey with iXperience started in 2016, when he joined the team as an intern while finishing up his degree at university. During this time, he also participated in the iX Data Science course as a student, applying much of what he learned towards his BSc in Biodiversity and Ecology.

Towards the end of 2017, Michael came on to join iXperience on a full-time basis, and quickly slotted in to the admissions team. Since then, he’s been on multiple road trips to schools around the States, and lived abroad in Berlin for four months where he helped to run the one of the study abroad programs.

When he isn’t helping students, Michael enjoys jiu-jitsu, learning about nutrition & fitness and a good frolic in nature. He also has a keen interest in conservation issues, and how technology can play a part in solving them. A message from the founder of iX.

“One of the biggest challenges I faced in college was where to go with my career or what to do next.”

"The people you meet at iX will be the most invaluable resource of all."

Remember to book
your interview!

Remember to book your interview!