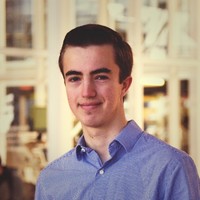 When I got to Cape Town, I had never seen a picture of the city and did not know that Table mountain even existed. I had never been to Africa before, and it was my first time in the southern hemisphere where their winter was our summer. I decided to go to South Africa right before the summer started, and despite the lure of an otherworldly culture to explore, the real reason I came here was because of the conversation about education I had with the iXperience team when they came to talk at my school in April. We talked about how there seems to be a huge difference between what students are learning in typical lecture-with-textbook courses and the skills that are useful for succeeding in their field, especially when it comes to the integration of technology.

I started college as a mechanical engineer because I had always loved challenging design tasks and working with my hands, especially after a summer program I did where we had an eco-friendly refrigerator design project. I was excited to do more of that, like designing and building a drone or making my own solar panel, but after three semesters of mechanical engineering I only had one class that came close to this and spent the rest of my time memorizing textbook material. When I asked my friends who just graduated with mechanical engineering degrees how much they were using what they learned at school in their jobs, they hadn’t used much of it and what they did use was not anything they learned through a textbook.

Getting a good engineering job by flashing my engineering degree and a good GPA, without learning useful skills I would need to succeed at such a job, did not make any sense to me. I decided I needed to pivot, and while looking for another major I got very interested in virtual reality technology after buying a new high quality VR headset, the HTC Vive. At first I was using it to play zombie shooting and sword fighting video games, but there weren’t that many games out when I got it. I ended up discovering a bunch of non-gaming applications that blew my mind, especially various design tools like Tilt Brush (3D painting), Google Earth VR, and The VR Museum of Fine Art.

Once it dawned on me that there were so many useful applications for VR—performing chemistry lab experiments without the risk and cost of chemistry supplies, or entering a 3D model of a house you want to buy that you don’t have the time to go visit—I realized VR could be a great subject to switch my focus to. Sadly, there is no program for VR at my school, and it turns out there are hardly any schools that have a program for learning to develop VR applications.

Then out of nowhere, iXperience came to talk at my school in April about careers in AI and VR, and happened to be running a new VR program at their summer abroad school in Cape Town. After the talk, I had incredible conversation with Tyler Evans, the iX admissions director, and told him my story about how I got interested in VR and my frustration with the education system. When he told me about how the iX philosophy was based around making education more enjoyable and interactive, and that their courses were all geared towards building in-demand skills, it felt like a dream come true. But I still didn’t understand the extent to which iX had succeeded in creating a better learning environment until I got to South Africa.

I arrived on a Friday night, and in my first two days I felt like I was Harry Potter arriving at Hogwarts for the first time. The other students at the program were so friendly, outgoing, and incredibly smart, coming from all around the world. It was immediately clear to me that iX was building a truly phenomenal community. I lived right by the beach which faced the most beautiful sunset I’d ever seen, with towering mountains right behind me where clouds were flowing over the top like spilled milk. I went surfing, ate at a food market that seemingly had food from every culture, and went to a beer festival filled with many thriving local breweries. It had still only been two days.

On my first day of classes I arrived at Workshop17, the central hub of iX, and was blown away by the workspace that seemed like it could blend into the campus at Google. My classroom was a glass box above a central café where students were studying together, working together, and chatting to CEOs of the startup companies who had offices across the café. Below the café and our classrooms, the sound and smell of unique clothing stores and restaurants created a pleasant ambiance and made working in a glass box above it all feel important and enjoyable. I had never been in a work environment that made me so happy and motivated to work with full effort.

To top it all off, iX managed to find a VR teacher who may well be the most well versed VR developer in all of Africa. Gerard is an architect who created his own VR tool for exploring 3D models that architects create in their design process, and started his own VR studio after realizing how incredibly useful VR could be in the field of architecture and many other fields. In the middle of a very busy winter for his startup, he took the time to teach our course and tell us his story about how he got into VR, why it is one of the most important new technologies to be learning, and how fun it is to develop VR content. His vision for using VR to create a plethora of experiences that could potentially change the way people spend their lives was inspiring. In the second half of our program our class became interns for his startup and he showed us the specific pathways his company was trying to realize his vision, and the work we were given was valuable to the company and pushed us to learn and adapt our skillsets in many ways.

Many of my friends have gone abroad and came back raving about how amazing the foreign culture they experienced was, but hardly any of them came back talking about the progress they made towards their careers and the high level of productivity they reached that I have found to be a natural part of iXperience. The reason I’ve made so many close friends here is because the iX staff are some of the best human beings I’ve met and they have an impressive judge of character. Somehow less than 10 full time staff have managed to produce a collaborative learning environment where you get to work with your friends, become friends with your co-workers, and explore one of the most diverse and beautiful cities in the world all at the same time. At its core, the iX philosophy is really about how to live life and how to constantly improve your life by expanding your comfort zone and being motivated about everything you do.